The Napoleon cat is a hybrid breed.  It was introduced to the world by Joe Smith in 1996, Joe's vision was an elgant version of the munchkin cat.  (Cat with short legs) The result was our lovely, doll faced, short legged, plush furred,  Napoleon breed.
The Napoleon is a TICA recognized Preliminary New Breed.  They are now seen in show halls and pet homes around the world.

The Napoleon is comprised of the Persian Breed Group and a munchkin cat. 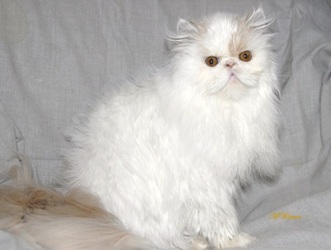 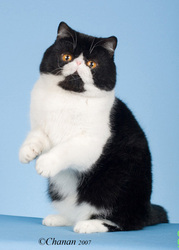 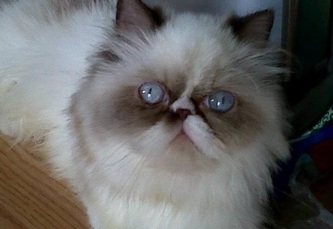 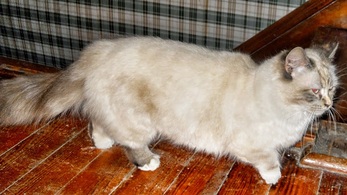 Layla
Seen to the left is a Munhckin Female.  She is a lovely example of a standard Munchkin.  Note the short legs.  Layla is a long haired Munchkin ~ she has a plush coat that is so soft that she feels like a stuffed animal. 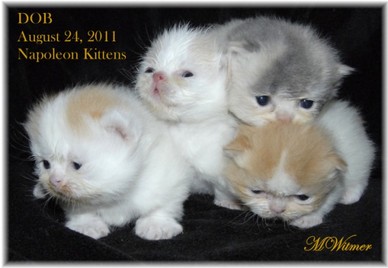 Past Napoleon Kittens
Pictured Right  are Napoleon kittens out born right here at Forever Kittens Cattery.  Note the sweet round faces, plush coats, round eyes and small ears.  This is what a Napoleon should look like.

Notice the photo on the left, one kitten has long legs, and one has short legs.  The kitten on the right labeled "short legs" is a Standard Napoleon kitten.
The kitten on the left labeled "long legs"  is a non-standard Napoleon kitten.  These kittens are brother and sister born in the same litter.  The long legged kittens grow up to look like doll faced Persians, the short legged kittens are the Napoleon Standard.
For Clarification
The term "Munchkin" is often used as a blanket term for a short legged cat of any breeding.  While the Napoleon is in fact short legged, it is a breed in and of itself.
Many years of research have gone into the short legged mutation of the Munchkin breed, it has conclusively shown that the short legs do not in any way hinder the cat or cause back problems as is sometimes the case with he short legged, longer backed dog breeds such as the Dachshund.
Interesting notes
The Napoleon breed is known for it's lovely disposition and easy going nature.  I have deemed them "pillows with eyes"  The Munchkin linage in the Napoleon background provides us with a sweet, playful nature , and the Persian background brings to us the ever-loving easy going feline friend.  Putting the two breeds together brought us the amazing  Napoleon! 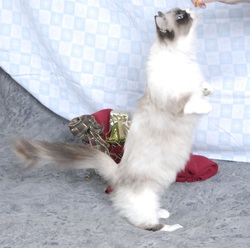 "Akina" Napoleon Female on her hind legs
The Napoleon cat quite often sits up on it's hind legs like a "Meercat."  They also are not known to be counter dwellers.  A welcome note in many households.  Napoleons are friendly and very cuddly without being obnoxious about it.  They are a wonderful addition to any family.
Napoleon cats are also known to be healthy due to the very careful breeding of these cats to only PKD DNA negative Persian group cats and ensuring that the standards called for in the Napoleon cat breeds provides for the utmost in optimum health for future generations to come.  Napoleon cats and kittens can be both long haired and shorted haired.  The long haired variety of Napoleon cat or kitten doesn't have nearly the grooming maintenance involved in long haired Persian cats.  The "Naps" as they are affectionately called have long silky hair that is very easily cared for, without all of the matting often associated with long haired cats.
Site Map:  Waiting List , About Us, Adoption Application, Important Information,  Napoleons Available,  Napoleon/Minuet information,  Napoleon Photo Gallery,  Highlanders Available,  Highlander Studs,  Highlander Photo Gallery,  Highlander Information,  Testimonials,  MORE Testimonials,
Blog,  Random Photo Gallary, Adults Available, ​